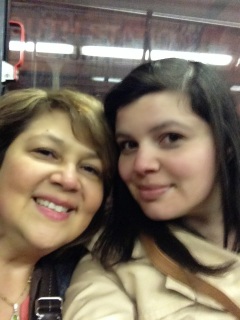 My mom came to visit me back in April. It was very nice having her here. She arrived on a Wednesday night, and I went to meet her at the airport. Then we came back to my apartment and chatted with Emma and Ryan for a bit. I took that Thursday and Friday off, and Thursday morning we headed to South Station to catch a MegaBus to New York.

We stayed at the Sumner Hotel in Brooklyn. It was pretty cheap, but looked like it was close to the subway, so I booked it. When we arrived, the subway line we needed to take was running on express, and since, at that time, I wasn’t sure what that even meant (I’m a New York subway pro now though), we ended up getting on the train and going a ways past our stop. So we walked down Broadway Street with all of our bags as people looked at us like we were crazy for being there. It was an experience. But I kind of felt like I was on Mission Street (Outer Mission) in SF, so it was ok. We checked into our room–which smelled a little bit like a sweaty man but was otherwise just fine–and headed back out to the subway to find a place to eat. We decided on Little Italy, and after walking around for a bit, trying to decide where to go, we chose the absolute worst restaurant I have ever stepped foot in. I hadn’t bothered to check Yelp, since I figured, if it’s in Little Italy, it’ll be good. Big mistake. I wrote my first Yelp review after finally finding them on there, only to find that they had barely been rated 1.5 stars. I don’t care how snobby it sounds–always check Yelp. 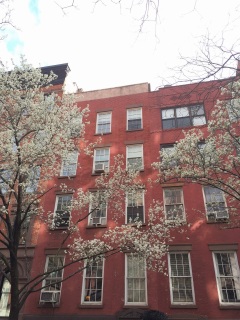 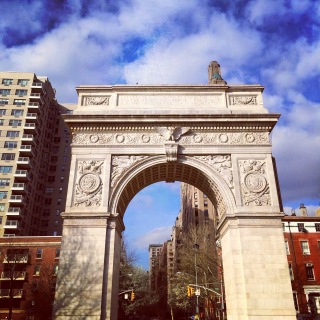 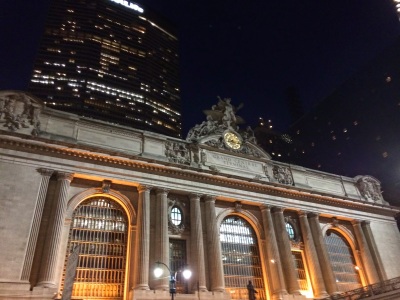 After our horrendous lack of a meal, appetites lost, we did some city exploring. First we stopped at Ferrera Bakery so Mom could get some treats, though, haha. We went to Washington Square Park, the F.R.I.E.N.D.S building, Rockefeller, and Grand Central Station, and it was all quite lovely. 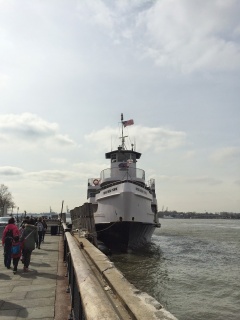 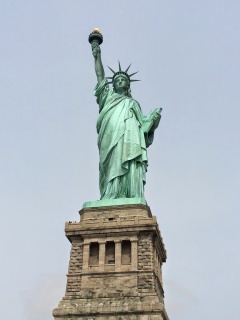 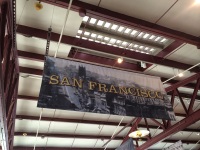 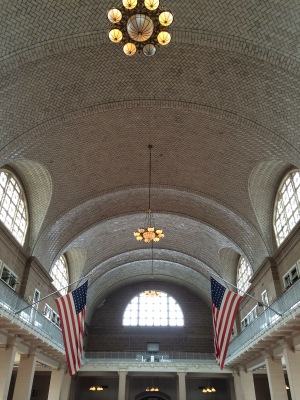 The next day, we went to Battery Park to catch the ferry to Liberty Island. I didn’t really ever have an interest in seeing The Statue of Liberty up close, but Mom wanted to go, and I’m glad we did. Listening to the stories of those who traveled from far away just to get to America was very touching. From there we went to Ellis Island. We tried to find my grandfather, since he came to Brooklyn from Italy, but we didn’t even know his first name, so that proved difficult, since there were plenty of Luongos. 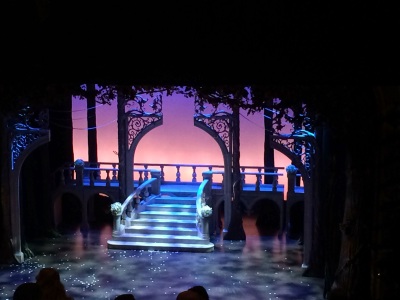 After that, and after consulting some Yelp reviews, we went and ate at Blue Plant Grill. It wasn’t the best, but we were hungry and tired of walking around. We were going to see Cinderella on Broadway later that night, and since we didn’t want to go all the way back to Brooklyn, only to have to return to the city a few hours later, we hung out in Caffe Bene for a bit. They had boba and free wifi, so that was nice. Then it was time for the show. Carly Rae Jepson played Cinderella, which was… interesting. None can compare to Laura Osnes. Fran Drescher played the stepmother, so that was kind of fun. 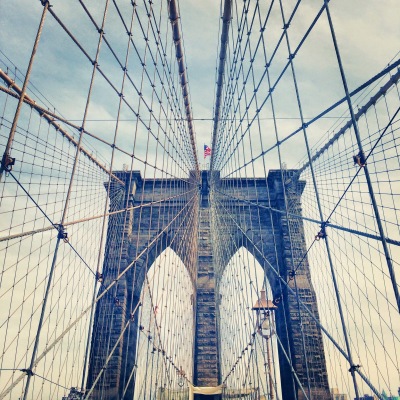 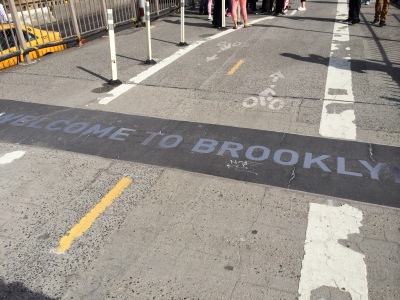 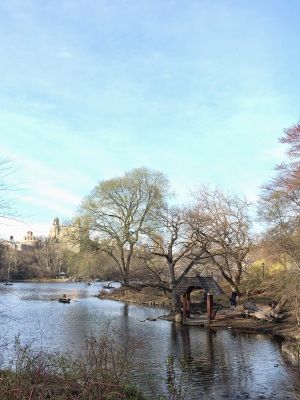 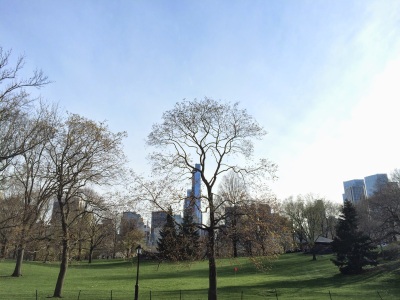 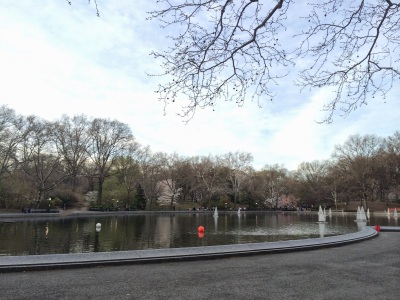 The next day, we slept in for a bit, which was really nice. Then we finally left the hotel and had brunch at Fresh Salt. It was pretty good. We tried speck for the first time, which is basically pretentious bacon. Then we walked across the Brooklyn Bridge. My goodness–I would not want to bike across that thing. It was overflowing with tourists (us included) and just looked like it was very stressful to navigate on two wheels. We had a lovely stroll across it though. After finally finding the subway near some park in Brooklyn, we made the trek over to Central Park. We spent the rest of the afternoon walking through it, which was very relaxing. Mom wanted to eat a hot dog, so we did that, too. After sitting on a bench for a bit, we went and had dinner at Bengal Tiger. Oh how I love you, Indian food.

The next day was Easter Sunday. We checked out of our hotel and walked to a different subway. That walk took longer than I had anticipated, and it didn’t help that I was carrying all of our bags and it was very early in the morning and I hadn’t touched a drop of coffee yet. We had been trying to figure out what to do with our bags while we spent the day out, since we were going to be heading back to Boston later that afternoon. After some Googling, I came across Schwartz Travel & Storage. It seemed kind of sketchy, but the Yelp reviews weren’t too bad, and we didn’t really have many other options, so we decided to take the chance and leave our bag. We just kept all of our valuables in my backpack and I held on to that all day. (Good thing nobody mugged us.) We took the subway up to Columbus Cafe for some bagels and coffee and to kill some time before church. Since it was right across the street from Milk, we stopped in there to get some cookies. We walked over to Redeemer for church, and found a line that had been forming from all the way down the street. Then we remembered it was Easter. Ha. Danny came and met us in line and we all got seats without any trouble. Nelson Mandela’s great-granddaughter was there, and she shared her testimony. That was cool to hear. After church, we went upstairs for a bit for some coffee, then Mom and I left to retrieve our bag from Schwartz. Our bag was perfectly fine, and we were surprised to see that the room had filled up with bags and people dropping off more. Then we went to the bus stop and headed back to Boston. From South Station, we took a cab home (yes, I got in a cab) and then ended the weekend with a lovely dinner down the street at Stella.

And that was our lovely NYC trip.

One thought on “Mom in NYC”

missing Boston and its people and traveling and seasons and hugs today.
flower pictures because why not.
someone is glad we can still go on walks. #stellamaudedog #socialdistancing #dogswhowalk #wildonepets
this weather has me ready for LA summer rooftop hangs. #latergram
“wanna go for a ride in the jeep?” my dad would ask. the answer was always “yes!” as I’d run to grab my hat and a toy to bring along for the ride. years later, as we’d reminisce, my dad would say “remember when Rachie always wore that silly-looking hat?” and we’d all laugh. that hat, the jeep, and my dad are all gone now, but I’m thankful for the memories, and this photo, that remain. #rip #oneyeargone
nothing like a good beach sunset moment.