Well, 2013 is over. The first six months flew by. I wrote about my first three months as a Bostonian here. Now here is what happened for the rest of 2013.

October
October will be remembered for dinner with Heidi and Sabrina in Kendall Square, shopping at the Wrentham Outlets with Heidi and Emma (where I spent WAY too much money but got so many good things), doing keynote for the first time at church, going through a corn field maze in Danvers and visiting Salem with Megan, Emma, and Dan, and hanging out with a Jamba friend (Ben) for dinner here in Boston. I also got to visit Vermont and New Jersey thanks to work, which I wrote about here and here.

November
November was a month of busy weekends. The month kicked off with Avila visiting Boston, the Red Sox World Series parade, and a day trip to Providence, RI. The following weekend, Heidi, Maggie, and I had a day in Portland, ME. The next weekend, Caitlin and I went and got our noses pierced (first for me, second for her). I’m so glad I finally did it, and I didn’t faint or anything, ha. Later that night Heidi, Emma, Ryan, Gabby, Charlie, and I all had dinner in the North End, then I met up with some co-workers and hung out. 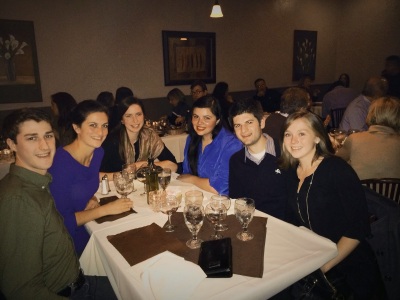 Later that same weekend, Heidi and I went to Salem to visit Maggie. I watched Heidi and Maggie brew some beer, and I got to FaceTime with my women’s group and it was all just very nice. That night, Maggie cut my hair, which I was very glad for, since my long hair had gotten to be annoying. 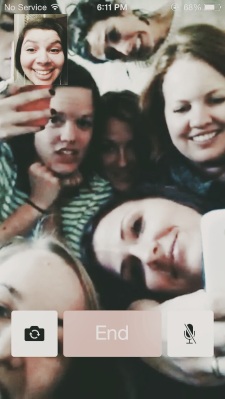 The following weekend, Reality helped put together Thanksgiving boxes in Waltham. A couple from our church buy Thanksgiving items and put together boxes for families who wouldn’t normally have a Thanksgiving. The weekend ended with Sabrina, Mallory, and me watching Catching Fire. And it was great, as expected. You can’t go wrong with Jennifer Lawrence these days. The last weekend of November was Thanksgiving weekend. I cooked during the day and then Laura and Mandi came over for dinner. It was nice having a low-key, quiet, relaxing Thanksgiving. We chatted the evening away and then they headed home. The next day I went and saw Frozen by myself, which was just so good there are no words.

December
Thanks to Amelia finding it via Google, Megan, Brian, Amelia, and I got to go on the South End Cookie Tour, where we walked around the South End, touring local business and trying six new cookies from six South End bakeries. Very fun. That same weekend, I watched Frozen for a second time, this time with Heidi. And this is how we looked after all the emotions:

And perhaps, someday, I’ll be able to watch that movie or listen to the soundtrack without crying.

The following weekend I went to see the Boston Pops with Caitlin, Sabrina, and Dani. And it was so very magical.

Later that weekend was our holiday work party at the ICA. I had quite the time getting there. It was the first heavy snow fall of the season and there were no cabs available. I had decided to be an adult and attempt to take one, instead of taking two buses and then walking through the snow in wedge heels, but I was left with UberX (with their terrific surge pricing) as one of my only options. I scheduled it anyway out of my slight desperation and waited for my driver to arrive. He ended up calling me because he couldn’t find my apartment, and after about 15 minutes of me standing in the snow on the phone, listening to David yell at me, he finally found me. I had tried to tell him never mind, I’ll walk! but he insisted on finding me. Since I didn’t actually want to walk and had already invested 20 minutes in this adventure, I obliged. Once I was in the warm car, we had a pleasant enough drive. When we arrived at the ICA, I thanked him for not giving up and for finding me, to which he replied by saying that he’d like to get to know me better. What? I was confused. I don’t really get hit on so I wanted to allow opportunity for clarity on what was happening. So he repeated himself. All the while, I’m having trouble opening the door, mind you. So I told David the Nigerian UberX driver who cannot follow GPS directions but is nice enough when he isn’t lost that maybe he’d find me again sometime, if fate should destine it, and made my graceful (I think) exit. 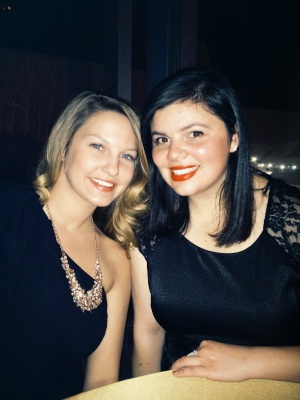 The party was very fun (once I got there). I had some of the best sushi I’ve eaten since moving to Boston, thanks to the sushi bar, and have decided that I am not so much a fan of the contemporary art.

On Christmas Adam, I hung out with Amie after work and ended up sleeping over. Christmas Eve morning I awoke in Beacon Hill and walked over to the movie theater and watched American Hustle (again, we cannot go wrong with Jennifer Lawrence), then went for a charming stroll around Boston. Later that night, Amie and I attended Park Street Church‘s Christmas Eve service, and ended the night by watching Love Actually back at Amie’s.

On Christmas Day I slept in, opened some presents I had received, then got ready to head to Al & Nina’s. Since they live pretty far from the T, and I was carrying a white elephant gift and bottles of wine, I decided to press my luck with UberX again. My driver was nice enough, and though his cologne was rather strong he did locate me without any problem, at least as far as I knew. And he didn’t hit on me. He just asked me where I was from because he said I look Lebanese. Harmless enough.

NYE was spent at Brian’s apartment with Brian, Morgan, Megan, Brian, and Eric. We ate and drank and played Cards Against Humanity and said Happy New Year! and then it was 2014. It was very low-key, which was nice. And it was great being able to just walk home afterwards, and not have to worry about tracking transportation or dodging drunks.

I moved to LA a year ago today. it’s been a wild ride, to say the least.
went on a seven mile hike and nobody fainted or fell. #urbanwilderness
Venice ✨
moved from OC to LA, lost a parent, went to Vegas for the first time, started a new job that I love, celebrated a year with @josuearias, experienced Minneapolis in the fall, went to our favorite place again (@valledeguadalupemx), and had lots of family time. thanks for the times, 2019. here’s to 2020 ✌🏻
LA ✨🌵
it was fun when we were young and now we’re older 🎶✨#happinessbeginstour #jonasforum