Oh the first of the month, how I love you. Today is just such a good day, and for no reason in particular, which is the very reason why it’s such a good day. Just because.

I pretty much did a summary of my February in my last post, but the rest of February was pretty great, too. Thursday I taught a lesson on mean, median, mode, and range to the 7th grade pre-algebra class that I’ve been doing my field placement with. It was actually pretty fun. I like being in a position of authority, haha. After that, Christine, Annika, and I met for our second lunch of the month. This every-other-week thing is really working well, haha. Then that night was the first day of home groups! It was so great seeing everyone again, and meeting a few new people. I love my home group so much. The next day, Annika dropped off a CSET study book that she’s letting me borrow, which is a good thing, too, coz I definitely need to review for it. I covered someone’s evening kiosk shift at work, so I used that time to look through it. I’m taking the CSET in a little less than two weeks, so I’m glad that I have that book. Friday night we went to Adorn, and then Christine and I hung out with Summer in her room and had ourselves a little adventure with the rain and ice cream and Summer’s massage sandals, haha. On Saturday I just hung around my apartment, watched The Proposal with Gaby, and waited for Christine to come back to me. She brought the granola, which is always a good thing. Home-made granola really is the best. I’m never going to buy already-made granola. Psshh.

Yesterday, after church, Christine and I hung around here, watching the rest of season three and beginning of season four of Lost (mostly me) and reading magazines and readers for school (just Christine.) After that, we were pretty tired of TV (and of reading, I’m sure), so we weren’t sure what to do. It was already pretty late, so we couldn’t really do anything outside, and we weren’t hungry and didn’t want to spend money, so that really left us with nothing. Gaby was working on a group project, Shea was working on an assignment, Ashley wasn’t here yet, and Summer was at her house reading for school. So we made a fort. And played in there. For about 1 and 1/2 hours. It kind of reminded me of a time last year when the power went out, so Gaby and I brought her mattress into my room, and she, Erandy, and I all laid on the floor in the dark, reading Kokology by flash light. 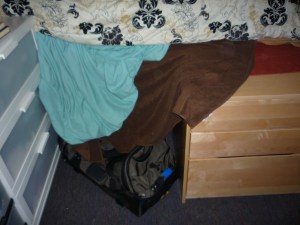 Shea took a break and discovered The Fort 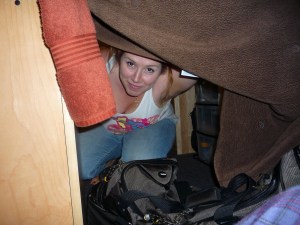 Us in The Fort

Once we were done in The Fort, we made a trip to Albertson’s for some supplies and headed on over to Summer’s to free her from her prison of productivity. We spent the majority of the time playing Egyptian Rat Slap, haha. Overall, it was a very nice end to the night, and to the month of February.

Speaking of rats, did you know that a group of rats is called a mischief? Kind of funny. No wonder they have such bad reputations. Poor little rats. If I were a rat, I would want to be like Remy from Ratatouille, and surprise everyone with some random skill that nobody would expect a rat to have. Rachel the Rat has a nice ring, even. But if I did wake up and find that I had become a rat, I would probably hide in a fort.

2 thoughts on “The Fort”